Adventures of an Agnostic in the Weird World of Catholicism 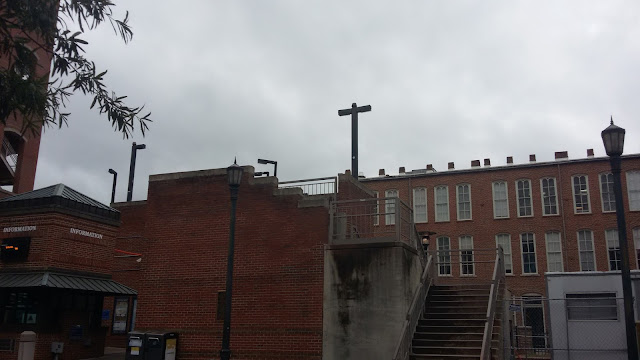 This piece originally appeared on the blog Sick Pilgrim, here.

When my roommates first told me that they were going to get time off their Purgatory sentence by going to confession, praying for the Pope’s intentions, and walking through a holy door in a church downtown, I didn’t know what to do with my face. I asked a lot of questions that night.

I’m a volunteer in the Jesuit Volunteer Corps and I often feel like a fraud because I don’t believe in God. I want to, but I don’t. With my Gideon bible and plastic rosary hanging as decoration on my mirror, I flirt with religion but can’t claim it as my own. I live in intentional community with five other volunteers working at various non-profits, we pray before meals and have Spirituality Night once a week, and despite my willingness to take part I still sometimes feel like an anthropologist with a notebook in my back pocket.

Thankfully JVs are not obligated to go to mass every week, pledge our celibacy, or proselytize to those we serve (I’ve realized that Catholics aren’t as into that as other Christians can be.) There’s no way I would have joined the program if that was the case. But I obviously knew there would be spirituality involved, and knew that I would be around a lot of Catholics. I finished my B.A. degree at a Catholic college, DePaul University, but I was drawn there more for Chicago and their American Studies program than Jesus. During the two years I spent there, I learned about JVC by taking service trips and decided to sign myself over to the Jesuits upon graduation.

I grew up a discontented Episcopalian girl who read books in her lap during the service and skipped out after Communion to plonk around on the musty piano in the fellowship hall. I remember being furiously indignant that I had to say things aloud in services that I didn’t understand or believe – I felt like I was being made to agree to a contract I hadn't read yet. I don’t remember any time in my life when I labeled myself as a Christian. My father is a Christian author and I knew how to speak the language because of him, but never felt comfortable in that world. We lived in Vermont, a fairly irreligious state, and I didn’t know many people my own age who believed in God. The only friend I had who was interested in discussing religion with me was an older boy on the bus who identified as a Satanist.

I have always been intellectually drawn to religion, keeping it at arm’s length through the lens of academia. I especially love learning about the dark and weird corners of religion, like snake-handling churches in Appalachia or the sky burial of Tibetan Buddhist monks (look it up, you won’t be disappointed.) Catholicism is just dripping with history, with more than enough darkness and morbidity in its past to satisfy any curiosity. I feel like I can move in religious circles because of my upbringing, but always as a politely interested outsider taking notes on everything that is new to me. For months I worked at a New Age crystal shop in Massachusetts, and although I dabbled in Tarot cards I did not find a belief system that made sense for me. It was also the most petty, dysfunctional, back-biting work environment I’ve ever been a part of and that soured the whole philosophy a bit.

I have had religious experiences in my life. I have felt a sense of the sublime while reading about space and astrophysics; beautiful music can do the same thing. And the Eucharist can move me to tears for reasons I can’t fully explain. Whenever I decide to attend mass with my roommates, during communion I have to walk up the aisle with my hands crossed over my chest like a mummy and stand before the priest while he says a blessing over me. This happened during my second week in JVC. After returning to my seat and seeing myself surrounded by sated, prayerful people who believed in God, I felt hot tears leaking out of my eyes. I felt alone, confused, and childishly left out of something huge. I hurried out of the church and waited for everyone in the parking lot.

I wanted to do a year of volunteer work before deciding on a career, and I did not choose the Jesuit Volunteer Corps at random. I wanted to put myself up against religious faith, even one fairly alien to me, to see myself in relief against it. From what I can tell so far, Catholicism is about pursuing and paying homage to the great mystery of existence. There’s that stark moment during mass when the priest says, “The mystery of faith,” and lets it hang in the air, a sentence fragment suggesting something deep and shadowy. For me that also encompasses the mystery of how someone can have faith, the leap that is required to get from cold rationality to God. I really admire that.
Posted by S. Clelia Sweeney at 12:58 PM