The Righteous Ruckus of Moonshine Holler 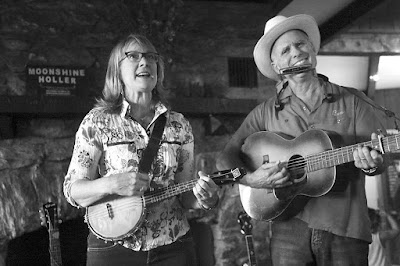 Paula Bradley and Bill Dillof are walking encyclopedias of American music history. The music they bring to life in their band Moonshine Holler is “old-time” music, pre-bluegrass rural American music from the 1920s and ‘30s. These are vernacular roots songs from before the 20th century that only started to be recorded on 78 rpm records in the ‘20s. Paula and Bill’s dynamic, impassioned interpretations of these old songs both honor their origins and breathe new life into them.

You know you’re in for a treat when a band’s slogan is: “Sometimes rowdy, sometimes reverent, always a ruckus.” Moonshine Holler certainly generates more ruckus than you’d expect from a two-person band. “The hallmark of us as a duet,” Paula says, “Is that we encompass a lot of sounds, because we each play a lot of different instruments.” Between its two members the band incorporates guitar, banjo, fiddle, steel guitar, ukulele, kazoo, and harmonica (rack-style, hooked around the neck à la Bob Dylan.) Both members sing and provide percussion with hands and feet as needed.

Bill grew up on Long Island, coming of age during the “big folk boom of the 1960s.” He started playing music when he was 15 and was performing by the time he was 16, although it never crossed his mind to have music be his career. He can remember being a kid and listening to what he would later identify as old-time music, on his transistor radio under the bed covers. He enjoyed the likes of Jimmie Rogers, Woody Guthrie, and The Carter Family. He says, “It just fascinated me. It was alien, very otherworldly music, but there was something captivating about it that you didn’t find in the rock-and-roll of those days.” Moonshine Holler’s repertoire comes from both Paula and Bill’s respective lifetimes of listening to these obscure 78s. “Anything that you could possibly express about your life, your emotions, anything that songwriters write about, it’s already been written better than you could ever write it,” Bill says. And between the old-time’s sub-genres like murder ballads, novelty songs, and children’s music, the catalog to draw from for material is mind-bogglingly vast.

Paula is originally from West Virginia, but was raised mostly in southern New Jersey. She says that, “like Bill, the radio was a big influence on me.” Music was a passion of hers from the time she started piano lessons at age 4. She clearly remembers as a child listening to a folk radio show on Sunday nights out of Philadelphia, where she discovered old-time, country, and early blues music; this drove her to learn how to play guitar. She then told her piano teacher that she wanted to play blues. He erroneously concluded that she meant Gershwin, leading Paula to do a bit of digging in order to learn more about this music on the radio that so resonated with her. In college Paula dove into the punk music scene, until she started playing the banjo and clog-dancing at age 21. She and Bill met at an old-time festival in the early ‘80s, although they didn’t marry until 2001.

Paula and Bill both come from a thriving network of people who perform, collect, appreciate, and obsess over old-time music. They met through mutual friends from the same scene, and had both been attending festivals for years. After they became a couple, they moved to the Berkshires from Cincinnati in 1998. Everything fell into place with the first Moonshine Holler show a few years later, at the Berkshire Harvest Festival.

Since then, playing music has become a way for Paula and Bill to connect with their community. As Paula explains it, “We live somewhat remotely, up in the woods. By doing performances at libraries and the free concert series, we found a way to connect to our Berkshire community. It’s been a way for us to get out and meet people and that’s been really gratifying.” They are both retired and get to spend their time focused on the band. They have played at The New Bedford Folk Festival, Old Songs, and other festivals, although focus most of their efforts on the immediate Berkshire area.

The band released their first album in 2015, Old Time Melodies, a lively and eclectic collection of their favorite songs to play. It showcases their expert banjo-picking, fiddle-playing, and seamless vocal harmonies; the album is also a tour through one of the more uncommon annals of American music history. Old Time Melodies was produced and recorded by the Berkshires’ own Bobby Sweet, Arlo Guthrie’s lead guitarist. But as Paula says, they never play a song the same way twice – so to get the full experience you need to listen to the band in action live. Old-time music is social music, and “all about the party, the coming-together of people.”

Moonshine Holler has some upcoming shows in August, including a benefit concert for the Tyringham Volunteer Fire Co. on August 6 (2-4 p.m.) and the Great Barrington Farmer’s Market on August 13 (10 a.m.) To find out more, you can visit their Facebook page or their Reverb Nation profile at www.reverbnation.com/moonshineholler. They are also available for private parties and weddings, if you want to kick your next gathering off with a foot-stomping bang!
Posted by S. Clelia Sweeney at 8:45 AM No comments: