Rocks and Water, Strings and Fire 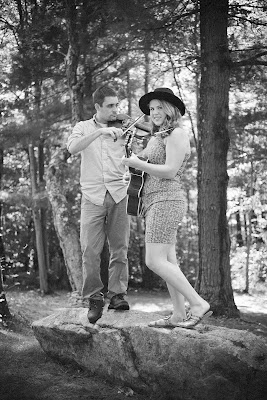 Sitting on the glowing, polished wooden floors of Sruti Yoga Center, I am basking in the sound of guitar and violin intertwining. Alexis, on guitar, taps her bare feet and sings out with a rich, mellow tone. Tom, on violin, watches Alexis intently as his bow skitters in triplets over the strings. The violin’s snaking melody beautifully accents the vocals, and there’s a wistful Irish lilt to its sound. Tonight I am getting a private mini-concert by a great up-and- coming folk/bluegrass duo, Rocks and Water.

Tom Doyle and Alexis Haluska met four years ago at Hudson River Coffee House’s open mic. Tom was playing solo violin pieces with a looping pedal, inspired by Andrew Bird, and Alexis was playing songs on her acoustic guitar. They were drawn together by each other’s style, and found commonalities in folk, bluegrass, singer-songwriter music. Their first show together as a band was at Caffé Lena in Saratoga, where they opened for Darlingside.

Alexis and Tom settled on the band name while hiking and singing to each other. Because Tom is an undergraduate student and the two live in separate states, they try to incorporate band rehearsal into whatever time they get to spend together. “Rocks and Water” is the title of a song by Deb Talan, which Alexis and Tom cover in a thrilling, rousing variation. Right now Tom lives in Long Island and Alexis is in Lenox, although over summer break they play a lot of shows around the Berkshires. Their songwriting process is often conducted via Dropbox, where they can each upload riffs, lyrics, and chord progressions to trade back and forth.

Alexis describes it as a “virtual music relationship.”

“Our music is mostly inspired by how little time I have to write it,” she says. “I work a full-time job and so does Tom, so this music is a release for us. It’s a way for us to connect.” She deliberately sets aside time to write songs in her busy schedule, and the lyrics that come are usually inspired by her day-to- day life. An older song, “Ambivalence,” is about the frustration of not having anyone to play music with; now Rocks and Water perform it live as a duo. Alexis writes the bulk of the music, while Tom contributes his violin parts. He says that he is glad to leave “the catchy stuff” to her, because when he writes he can get “very anal and go off on tangents not fit for audiences.”

Both band members are from the Albany area – Tom is from Delmar. As a kid he wanted to play drums, but his father said that all drums were being replaced by computers so he should pick a different instrument. He chose violin. In college he started out majoring in Music Education, but switched to Biochemistry when he found that it was starting to mar his enjoyment of playing music. He comes from a musical Irish family, and Irish fiddling is a style he feels at home in. Although his primary musical project is Rocks and Water, he also plays with an upstate New York reggae-rock group called Brian LaPoint and the Joints.

Alexis hails from Guilderland, a town very close to Delmar, although she and Tom never met while growing up. She started teaching herself guitar at 16 after asking her parents for one for Christmas. She says, laughing, “Tom’s family is very musical, and my family asks me where I got it from. I’m the first generation.” Having always written poetry, she found that it was a smooth transition into writing songs. She looks up to female folk artists like Anais Mitchell, Sarah Jarosz, and Gillian Welch, with the ambition of joining their ranks. Alexis just bought her first electric guitar recently, and says that she is “very excited” to start experimenting with it.

You can listen to Rocks and Water or buy their EP at www.rocksandwater.bandcamp.com, and be sure to like them on Facebook to stay abreast of all their upcoming shows. On August 6 they will be performing at Sruti Yoga Center in Great Barrington (where I got my private concert,) at 7 p.m.

They will be playing songs from their forthcoming album, due out at the end of August.
Posted by S. Clelia Sweeney at 9:23 AM