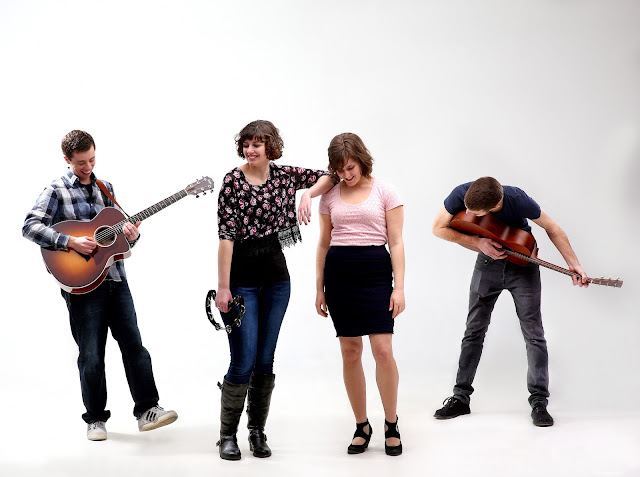 If you want a quick visual representation of the mood of Darling Valley’s new album, Crooked Orchards, watch their homemade lyric video for the first single, “Graces.” The four band members take turns standing against a blue wall, flanked by balloons, and hold up poster-board signs with handwritten lyrics à la Bob Dylan. The number of balloons slowly increases and the sign-holding becomes sillier and sillier, as the breezy melody carries the song along. By the end of the video it’s a melee of laughter, air guitar, lightsaber jousting, and balloon bopping.

This Albany folk rock quartet is composed of two married couples: TJ Foster, Lauren Foster, Jordan Stewart, and Ashleigh Whitfield. Formerly known as Accents, they have released two albums previously but their newest release is their first album released under the new band name. Crooked Orchards came out on June 24, 2016, fresh off the presses of Sounds and Tones Records in North Adams. Chris Hantman from the label is a big supporter of the band, and they credit him for bringing the full creative vision of Crooked Orchards to life.

The warm, comfortable familiarity that the band members have with each other really comes through in their songs. TJ and Jordan met as roommates at SUNY Oneonta, and Jordan went to high-school with Ashleigh. The band Accents was created as a solo project for TJ, but he soon brought in Jordan and Lauren to do some recording and perform with him live. Jordan was married to Ashleigh at the time, and says that, “it was a natural transition for Ashleigh to join and create what is now Darling Valley, since she had been a vocalist for years and we were all best friends to begin with.” Ashleigh came from a chorus and musical theatre background, as evidenced by her rich, resonant voice. As she says, “I lived and breathed nothing but Broadway for several years.”

As the first release under their new name, Crooked Orchards marks a new sense of cohesiveness and beginning anew for the band. TJ describes the decision to change the band’s name from the more generic Accents to Darling Valley: “The four of us all came from different places and different backgrounds but we ended up where we are now, living less than a minute apart and we embrace that every day. That’s our darling valley – a place where we can celebrate every victory and plow through every loss together.” The band, in that sense, becomes a true home for its members, which they can furnish with their respective talents and passions. TJ feels solidly at home in music, and says, “When I’m writing or performing music I feel like myself. That longing for comfort and catharsis is really what keeps me playing day after day after day.” He was the one who urged Lauren to get back into singing and performing, and she credits him as one of her inspirations; as well as her “true muse: Jenny Lewis.” 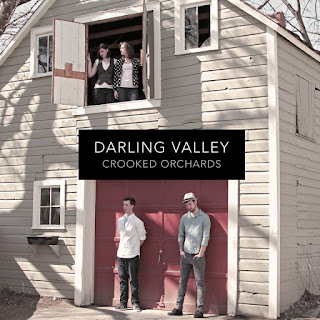 Darling Valley’s sound is varied enough to satisfy any fan of folk, alternative pop, indie rock, or acoustic balladry. On this album, there are so many good tracks that it’s obvious they’ve come into their own stylistically. “Written on My Bones” begins with sweet, sparkling guitar and unfolds into the bright, acoustic rock sound that Darling Valley does best. Jordan mentioned that he was “on a Simon & Garfunkel kick around the time we recorded the album,” and it really shines through in places. The second single, “Widows and Revolutionaries,” is a rousing, foot-stomping song with a soaring melody, lyrically reminiscent of The Decemberists. “Five Years at Sea,” a contemplative song about travel, even has some surf guitar touches swirling through the tambourine beat.

A lot of the songs are about the endlessly complex topic of love – with two marriages in the band, there must be plenty to write about. As the lyrics go in “Half Your Life,” the Nationals-esque album’s closing track: “But I know now / Love is the best thing we do / And I’ll give my best side to you.” Indeed, the band incorporates their love for other members of their families into their musical projects as well.

Their second music video from the album for the song, “You’ll Go Far, Kid,” was conceived and expertly directed by Adeline Foster, the 8-year-old daughter of TJ and Lauren.

Darling Valley recently won WVCR’s “Play to Play” contest, and will be playing at the free, outdoor concert series Rockin’ on the River on July 6 in Troy, NY. To stay updated on their other upcoming shows and more exciting music video releases, be sure to follow them on Facebook or check out their website.