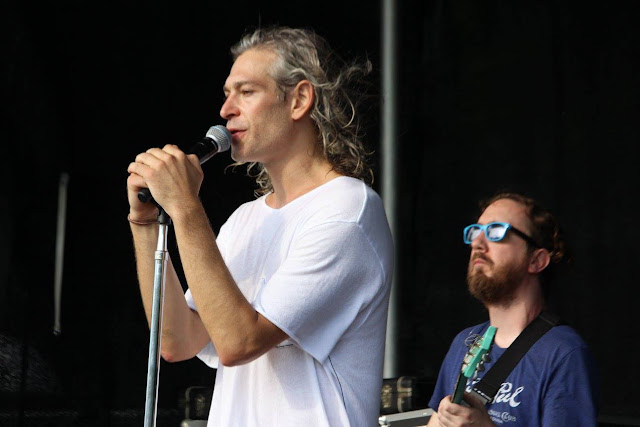 This article originally appeared in The Berkshire View magazine, here. All photos by James Grady.

I am standing on the vernal summer slopes of Ski Butternut in Great Barrington, amid a crowd of people gathered in the thick humidity to watch Matisyahu perform. Skirts are billowing, bare feet twirling, heads nodding, wristbanded arms flung up in the air. The scent of pot drifts over our heads in peaceful, eddying waves. In the middle of the gaggle of bodies a man dances with a cigarette in one hand and a water spritzer in the other, which he sprays periodically over the crowd’s thankful heads. Mid-verse Matisyahu clutches the mic with both hands, closes his eyes, and begins chanting in Hebrew as the cheering swells.

Matisyahu became well known in the mid-2000s as the man who introduced Jewish hip-hop to the mainstream. He was a Hasidic man who could expertly beat-box and spit rhymes over a reggae fusion beat. Lately he has shorn his beard, but he is still just as devoted to his personal faith as to his music. An avowed Phishhead, Matisyahu’s love for full-band improvisational jam translates into an amazing live act. There were Santana-style guitar flourishes, intense drum solos, and the most entertaining keyboardist I’ve ever seen; he rocked and grinned over the keys like jazz virtuoso Keith Jarrett. Matisyahu’s verbal acrobatics, coupled with his phenomenal backing band, created a groove that pulsed through the ground and got everyone to dance (or at least sway in quiet joy.) Onstage he jumped and kicked around like an ecstatic ska Jim Morrison. 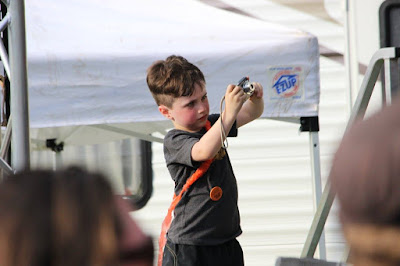 After the show the band was gathered out behind the stage, signing autographs and taking selfies with fans. We talked to Matisyahu for a minute and learned that the Pennsylvania native had once visited Great Barrington as a high-schooler. One of his friends had been accepted into Bard College at Simon’s Rock at 17, and young Matisyahu (then Matthew) came to visit him. He said laughingly that things looked pretty much the same here as they did then.

The bounty of food trucks at the festival did not disappoint. I had a perfect burger with all the fixings from PaPa Dogs and Burgers, cool hard cider from Hilltop Orchards, and talked with the lovely husband-and-wife proprietors of The Farm Concessions. They drove their truck all the way from Keene, NH, where they will soon be opening a café. A few hours later, I gave in to temptation and got fried, bacon-wrapped mac-and-cheese balls on a stick from The Chuck Wagon; as you can imagine, they were sublime. At least I didn’t get the “Hot Mess”: a Twinkie and a hot dog deep-fried together and smothered in pulled pork. 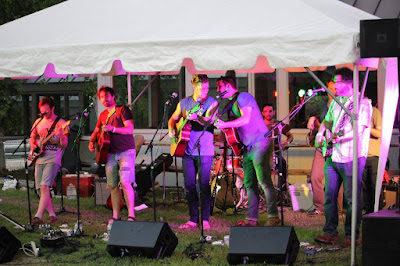 As twilight loomed over the festival grounds, a circle of women was silhouetted against the mountains doing group yoga. Up on the hill above them, people retreated to camp sites, wrung out their sweaty T-shirts, or settled onto blankets to watch Whiskey Treaty Roadshow bash out some good roots rock at the festival’s after party. Assembled on stage were 7 string musicians – on guitar, bass, banjo, or Dobro – and one drummer. They had been playing alt-country and Americana classics all day between acts on the main stage. I recognized Chris Merenda from The Picky Bastards on banjo. In the grass watching them were couples drinking beer, a woman swinging a hula hoop around the bun on her head, and solo listeners sitting on blankets or laid-out sweatshirts. As Chris sang “This Land is Your Land,” the pink-laced azure sky slowly darkened and the first day of the festival wound down to a close.

To see more photos of this year’s MASS Gathering from our editor and expert photographer, James, check out The Berkshire View’s Facebook page. We have photo coverage of events throughout the day, including some of the other great bands who performed. These include Deer Tick, Gin Blossoms, Parsonsfield, Wild Adriatic, Madaila, Strange Machines, DJ BFG, and West End Blend.