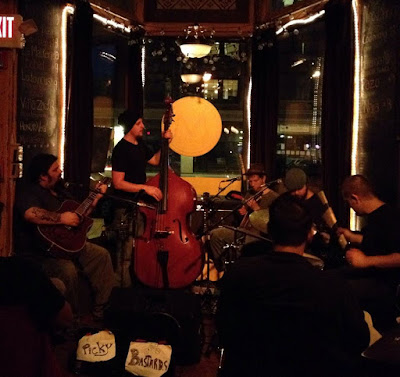 I defy you to find a band more spontaneous and improvisational than The Picky Bastards, Pittsfield’s premier bluegrass band. They’ve never had a rehearsal, never made a set-list, and sometimes change the song they’re playing halfway through. Core members Rob Sanzone (guitar, mandolin, harmonica, slide and dobro guitar, vocals) and Chris Merenda (banjo, guitar, vocals) play every week at Mission Bar + Tapas, and through that venue have been able to expand to play private parties, weddings, festivals, and other places in the Berkshires. Not that any of that was through conscious marketing – they’ve gained popularity and secured outside gigs purely by word-of-mouth.

I met up with Rob and Chris at Fuel in Great Barrington for sandwiches, and we talked for an hour and a half about everything under the sun. The two are clearly close friends, laughing at inside jokes and occasionally sliding into Spinal Tap-esque British voices with each other. Rob is a local through and through, raised in Berkshire County and a graduation of Monument Mountain High (as well as Amherst.) He even told me about the migration of the famous Zonker Harris sandwich from Frank’s Deli to Fuel, so you know he’s from Great Barrington. He’s been playing with bands since high-school and has experience over a wide spectrum of genres, although he has a special reverence for the complexity of bluegrass.

Chris, a New Hampshire native now living in Becket, came to the area while touring with Arlo Guthrie. He met his wife on that tour and, as he says, “she roped me in to staying here.” He started playing banjo in 2001 at Ashokan Fiddle and Dance Camp in the Catskills, a music camp in New York founded by his brother’s father-in-law. There he gained a deep love of American traditional and folk music, specifically bluegrass. One of his favorite old standards is “Shady Grove,” now a Picky Bastards staple.

The two met through Dave Brown, mandolin maestro and original founder of the Picky Bastards in 2011. The band started as a weekly picking session in the window of Mission Bar, open to local musicians. Rob and Chris took over the outfit when Dave moved to Colorado a year after it began. The band has always retained that open-jam vibe, and performs with a rotating cast of musicians every week. I had originally asked if the whole band could be present for the interview, but it turned out that they have 10 drummers alone and it would have been nearly impossible to round them all up. Additional instruments in The Picky Bastards include drums, bass, rhythm guitar, and occasionally saxophone. 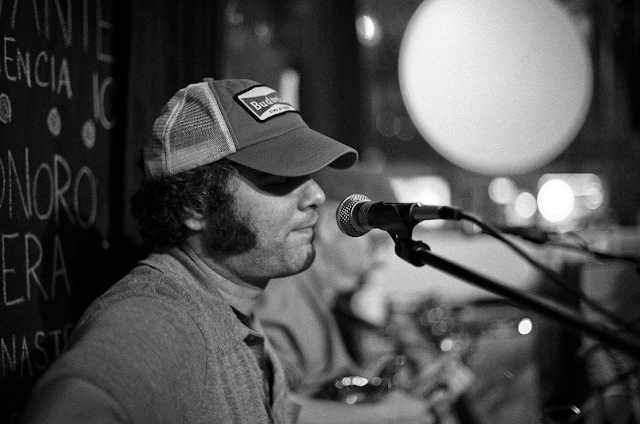 “Natural selection” is a phrase that Chris brings up multiple times in reference to the band – the players, the band’s trajectory, even the songs they perform in a given evening. Their songs can be chosen based on comments from the audience, who’s in the band that night, or what’s on the radio on the way to a gig. The people they perform with come to the band by reputation and circumstance, with Rob and Chris drawing on their extensive pool of fellow local musicians. This makes every concert feel like an easy-going jam session with friends, a social experience for the band as well as the audience. As Chris says, “We laugh a lot, which maybe the audience doesn’t always enjoy. We do have some hardcore audience members who will say things like, ‘Stop talking and play!’”

Although bluegrass/Americana is the starting point for the band’s sound, they can go in any number of directions over the course of an evening. The Picky Bastards have been known to dabble in jazz fusion, pop, and classic hard rock, all while retaining their underlying bluegrass flavor. Imagine, if you can, a bluegrass version of “Eye of the Tiger,” “Billie Jean,” or Britney Spears – they’ve done it. They also perform original compositions, not wanting to be known as solely a cover band. One of Rob’s specialties is creating spontaneous medleys. He can transition seamlessly from one song to another, lapping genres and artists over the course of a single jam – and the band can always keep up with him. They are planning on recording a live album in the near future, to capture some of the extraordinary chemistry they have in their shows.

Having played with more business-driven bands in the past, The Picky Bastards is a breath of fresh air for Rob. The band has evolved organically and everyone is involved because of their genuine love of the music. “The Picky Bastards has been a blessing in my life. It’s a very Zen experience, like a great circle of friends. I owe a lot of that to Chris, because Chris is one of the most laid-back people I’ve ever met. I’m probably more the picky bastard of the two of us.” Chris, in his Big Lebowski t-shirt, laughs and agrees.

Come down to Mission Bar + Tapas on a Thursday night, 8 p.m., to hear for yourself all that these Bastards capable of doing. The show is free, so be sure to give them some love in the tip jar. If you tip, they’ll call out, “We celebrate you!”, but if you walk out without tipping they may include a call-out to you in the song they’re playing. If you have a request they promise to play it for you, or at least play something in the same genre. “We have a rule,” Chris says, laughing, “if we know at least 30% of a song, we’ll give it a try.”