Immune Friction: A match made in grunge heaven 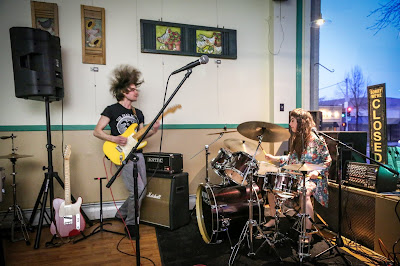 You could say that Justine Curry bluffed her way into Immune Friction. She met Chris Dayton while working in a Bennington coffee shop in 2010 and connected with him immediately; so when he said he was looking for someone to add percussion to some music he’d been writing, she said that she could play drums. When they recorded their first album as a band, The Markets Never Sleep, Justine had been teaching herself drums for only three months. “We just sort of did it,” she laughs. “The first time we jammed together we were so in sync and it just fit.” What began as Chris’ solo project morphed into a dynamic two-person band that has been rocking the Berkshires ever since.

Originally from Manhattan, Chris Dayton has been writing songs and playing guitar since he was 13. As the song “What Gives” poignantly puts it, “After school I would rehearse / Songs full of nonsense / That nobody would ever hear.” He studied classical guitar at Keene State College and performed at a lot of open mics before deciding to start his own band. He started Immune Friction as a solo act, played some shows, and recorded an album entitled Lighting Strings to Melt Wax. On their latest album, his passionate, earnest voice can go from a mumble to a shout within a few seconds. Although Chris is the lyricist for the band, both he and Justine sing – sometimes harmonizing together and sometimes alternating melodies.

Justine Curry, a Pittsfield native, has been performing since the age of 4. Between dance recitals, theatre, choirs, The Berkshire Lyric Theatre chorus, and even recording with David Grover, her fascination with music and performance has remained constant. As a girl she remembers going to Tanglewood with her family and planning to become an opera singer. She is classically trained in voice, and now contributes her mellifluous phrasing and powerful vibrato to Immune Friction. But she always loved rock music, despite her classical background; she and Chris initially bonded over a shared love of Iron Maiden.

While onstage they resemble The White Stripes, with Chris shredding on his guitar and Justine banging her drums, long black hair shaking, Immune Friction sounds very different than the famous ‘90s duo. The genre moniker they go by is “surf grunge,” bestowed on them by a fellow musician in Vermont. The subgenre encapsulates their ‘60s pop sensibilities (think The Kinks) with the raw energy and emotion of grunge. But their music also has the frenetic post-punk inventiveness of Sonic Youth, Doors-like classical guitar flourishes, and Rage Against the Machine noise breakdowns. The most immediate band comparison that comes to mind is Nirvana, though, which Chris’ blue eyes and shaggy hair only serve to reinforce. 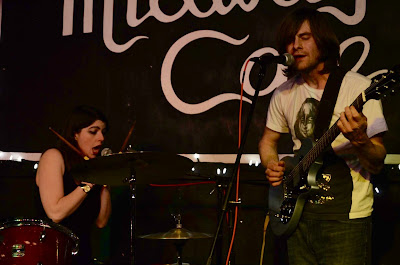 One might think that a two-person band would inevitably sound sparse, but Immune Friction manages to produce a fully fleshed-out wall of raucous sound. Chris explained that he often tunes down to a lower pitch to accommodate for the lack of bass guitar, and Justine employs a lot of bass drum. She says, “People are like, ‘it’s just you two making all that racket?’ We’ll make noise with anything – guitar on cymbals, drumsticks on guitar, anything.” They’re known for their dynamic live shows; it says a lot that friends and fans have been known to follow them from gig to gig. “When people come out to see us, they’re going to get a good show,” Justine says. “Sometimes we don’t even know what we’re going to do! We try stuff out, sometimes it works and sometimes it doesn’t.” Chris laughs and adds sheepishly, “It can be a little scary sometimes.”

Amanda Palmer talks about falling in “rock love” when she met her Dresden Dolls bandmate Brian Viglione, and this term kept coming to mind while I was talking with Chris and Justine. They both have so-called day jobs – Chris is a videographer and 2nd-grade teacher while Justine is a realtor – but Immune Friction provides them with alternate indie-rock-star lives, existing as testaments to their creative passion and drive. As Justine describes herself: “realtor by day, drummer by night.” The two live together in Bennington with their five beloved cats – altogether, not at all a bad life. 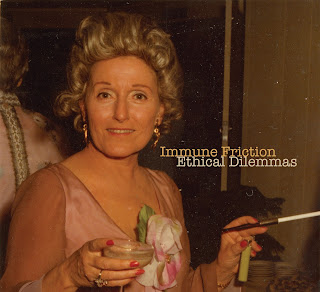 Ethical Dilemmas is Immune Friction’s fantastic new album, recorded with punk/hardcore veteran Don Fury in Troy, NY and just released mid-April. It is available on iTunes, Amazon, Google Play, Bandcamp, CD Baby, and YouTube Music. The duo is going to be touring around New England over the next couple of months – in May they are coming to Saratoga, Williamstown, Bennington, and Pittsfield. For more information and to stay updated on all their activities, visit their website or check out their Facebook page.
Posted by S. Clelia Sweeney at 8:04 PM