Party Like it's 1939: Swing Dancing at Race Brook Lodge 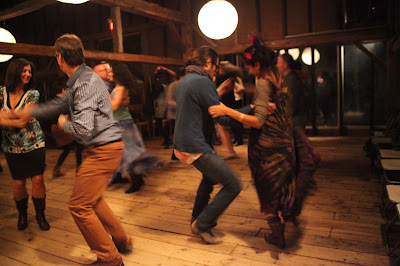 “Basically everyone’s up for grabs – it doesn’t matter how good or bad or ugly you are!”

Laughter bubbled up from the crowd, a circle assembled around two dancers in the middle of a barn. The MC is explaining the dancing game of Snowball: one couple starts dancing for a bit, until someone yells “Snowball!” – then each person has to grab a new partner from the crowd. Repeat until the whole room is dancing, young with old, swing aficionados with newbies, guys in boots with pretty girls in bell skirts. I was taking notes on the sidelines when a redhead with dreadlocks scampered over to me on bare feet and snatched me up, pulling me into the beautifully swirling melee.

This night of swing dancing happened on April 8 at Race Brook Lodge, in their 160-year-old barn – a beautiful piece of rustic construction. Chinese paper lanterns swayed from the rafters and soft tea-lights glowed in Mason jars. The room was suffused with the warm babble of conversation. This is one of the many live music and dance events that happen at Race Brook Lodge, like the Down County Social Club events on Thursday nights.

Everyone is welcome, regardless of skill level, and the hour-long lesson before the dancing starts definitely helps out everyone. I went with a group of friends, some of whom were seasoned swing dancers and others who had never danced before. The relaxed, welcoming atmosphere helped us all to melt into the crowd easily and join the party. Social dancing is making in certain circles, and there is a somewhat unexpected modern swing scene emerging today. I had some dance experience because when I was at college in Chicago two years ago, I was a member of the student swing dancing club. I got a small flush of pride when the redhead I was dancing with said, “You’re a swing dancer!” 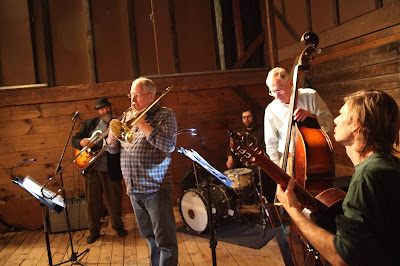 All night the band One Straw Revolution kept the dancing going with jazz and blues standards, from the sultry “Angel Eyes” to the frenetically fun “It Don’t Mean a Thing (If It Ain’t Got That Swing)”. The five-member band has been playing together for thirty years and this is their fourth time performing at Race Brook. They took their name from a book by Japanese sustainable-farmer and philosopher Masanobu Fukuoka. Guitarist Jonathan Suters joins his father Roger Suters on bass, along with some friends. They write their own music, in addition to performing standards and covers. Guitarist/vocalist Bobby MacVeety looks around admiringly, with his hat cocked back on his head, and says that he loves the acoustics of this barn. He also loves to dance, and would if he could tonight.

Outside the barn is a cozy bonfire, to which people withdraw occasionally to smoke, talk, or just listen to the wind sifting through the tops of the trees. I bought a glass of red wine from the cash bar and went outside to join the ragtag circle of people standing close to the warm flames. Race Brook Lodge has a renovated speakeasy vibe to it, and the swirling swing dancers don’t seem at all out of place in a barn, surrounded by peaceful forest. This was a night of throwback fun with fashion to match; as one of the organizers, Amillie Coster, said to my friend Maria, “Everyone else here looks like a farmer, but you’ve got that swing look we were missing – like Betty Boop.”

If you missed this swing night, there will be another Down County Social Club swing event on April 30, with the Hot Club of Saratoga (boasting a highly danceable gypsy jazz sound.) In May you can catch shows at Race Brook Lodge by Oakes & Smith, EarthBlu, and Emily Danger. For more information visit www.rblodge.com or check out their Facebook page.