[Written as a final project for my winter quarter Journalism class -- March 13, 2015] 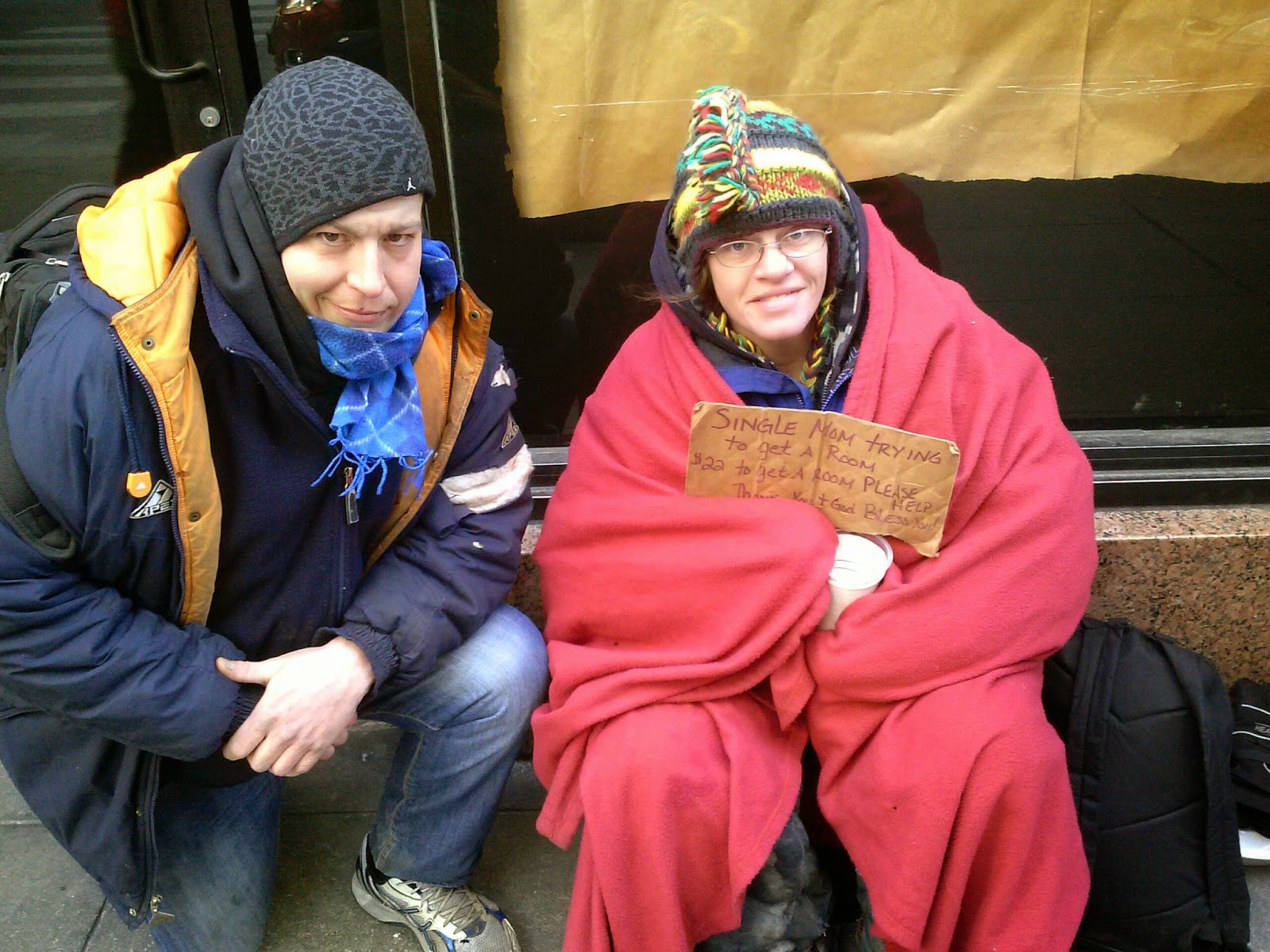 Dan (left) and Bonnie, out on State St.

The common stereotype of the crazy homeless person muttering to themselves on a street-corner is rooted in real systematic oppression and neglect. It’s a zero-degree day in the Loop and three homeless men stand to warm themselves in front of a large vent on Van Buren St.: Longworth, Levi, and Stan. Stan is visibly drunk, speaking in short bursts with a bottle of vodka clutched in his mitten. As we walk away from the trio Bonnie McNulty, another homeless Chicagoan, says, “Stan was in rare form today.” Usually he walks down the street yelling at passers-by, but today he was able to self-medicate with alcohol to escape the schizophrenia he suffers from. He’s been on the streets with his friend Longworth since 1990.

Self-medication through alcohol and drugs is a common reaction among mentally ill homeless people to the lack of care they receive. Even if a homeless person gains access to psychiatric medication they will often not have regular therapy to go along with it; this causes them to go off their meds and seek comfort elsewhere. Bonnie, who was diagnosed at 13 with bipolar disorder and later with Post-Traumatic Stress Disorder (PTSD), has had this experience. A lack of therapy also means that she was unable to manage the bad reactions she’s had to medication. She says, “Lithium is not a very friendly drug.” The lack of support caused her to go off her medication entirely – it wasn’t helping and only made her feel “like a zombie.”

Bonnie says that she understands why some people with mental illness are averse to taking medication at all. For schizophrenic people who hear voices, “It’s comforting to have a conversation with somebody every day. Nobody wants to be alone.” She once gave a slice of pizza to another homeless woman who then proceeded to talk animatedly into an empty storefront window for half an hour.

She describes another woman she knew who slept under a bridge for eight months, refusing to take money from anyone or go to a shelter, remaining sedentary outside until her legs swelled up and turned black. The woman had an untreated mental illness. It is much more difficult to deal with mental illness while also trying to survive on the street. As Bonnie describes her bipolar disorder, “It’s like that Norman Rockwell painting with the man selling balloons, only each balloon is a thought. He’s somehow let go of the balloons and is grabbing at them all, trying to catch them.”

According to the National Coalition for the Homeless, 20-25 percent of homeless people in the United States suffer from a severe mental illness. In an effort to address homelessness itself, Obama proposed a $301 million increase in the housing budget – but it stalled in Congress. While providing housing is an immediate prerogative in fighting homelessness, it has been shown that mental health counseling services help to ensure that people can keep those homes. Too often a vicious cycle is created by lack of treatment, the result of which is a life spent in and out of shelters, hospitals, psych wards, jails, and other institutions that do not provide ongoing care. 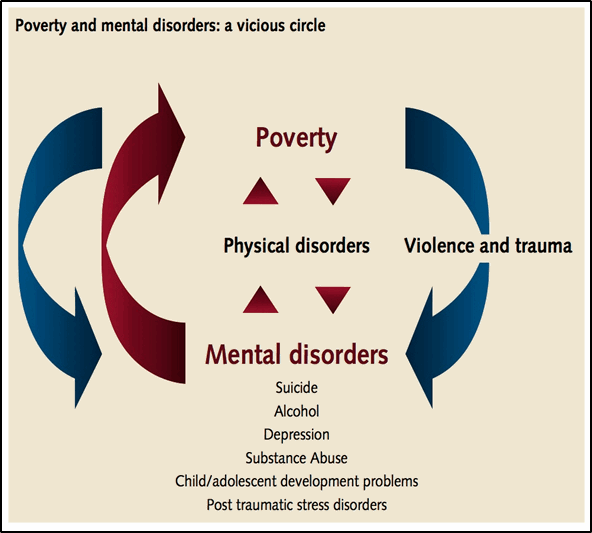 Diagram from “Mental Illness and Homelessness,” by Mieke Dale-Harris of Econintersect LLC. Copyright 2013.

Growing up underprivileged with a dysfunctional home life will also predispose a mentally ill person to homelessness. Levi, also warming himself by the Van Buren vent, is a former member of the Chicago gang, Gangster Disciples. He says, “I’m a product of Larry Hoover [the founder of GD]! I come from a 16-story project and I didn’t have no mom or dad. They were my mom and dad.” It is difficult to diagnose mental illness at a glance but Levi was manic and paranoid, spitting out his words and not wanting to say his last name out loud because he “don’t trust [his] friends.” Bonnie suspects that he has PTSD and possibly schizophrenia.

Schizophrenia, bipolar disorder, depression, and PTSD are the most common afflictions among homeless people. The prevalence of mental illness is not a new phenomenon, dating back to the policies of the Reagan era. Karl Nass, Associate Director of the Vincentian Community Service Office at DePaul University, says that, “It has to do with the history of deinstitutionalization. Funds were not in place once folks were let go from mental hospitals, often into unsafe urban environments, and their conditions were exacerbated.”

He says that he is “saddened and angry with the lack of funding,” but “hopeful about change from activists and advocates.” He also says that housing needs to be offered in conjunction with counseling services – “Research has shown that an integrated, holistic response seems to be wisest.” Karl teaches a course at DePaul on homelessness in which he strives to alter students’ preconceptions about homeless people. He remembers that when he worked at his first shelter as an undergraduate in Madison, WI, his own notions about homeless people were completely altered as a result of simply interacting with them. Once stereotypes are broken, simple human compassion can come through.

Bonnie and her friend Dan Rusick often stick together on the streets. Dan is not mentally ill himself, although he has seen its effects first-hand. In a Starbucks he points out a violent schizophrenic homeless boy who once took food from Bonnie by force. He says that he isn’t close to many other homeless people because you need to protect yourself. “All we have is what we own on our body and our word. And then somebody breaks it – after that, it’s hard to trust anybody else.”

Many of Chicago’s homeless people struggle unaided with mental disorders, but all of them have vibrant inner lives that can only be guessed at by those who drop quarters into their cups. On the walk to Harold Washington Library to use the public bathroom (one of the few he has access to), Dan tells me how he loves to escape into books – in a way, his own positive form of self-medication. His favorite author is William S. Burroughs. He says, “I probably am depressed, but I won’t let myself get depressed. It’s there, around the corner.” 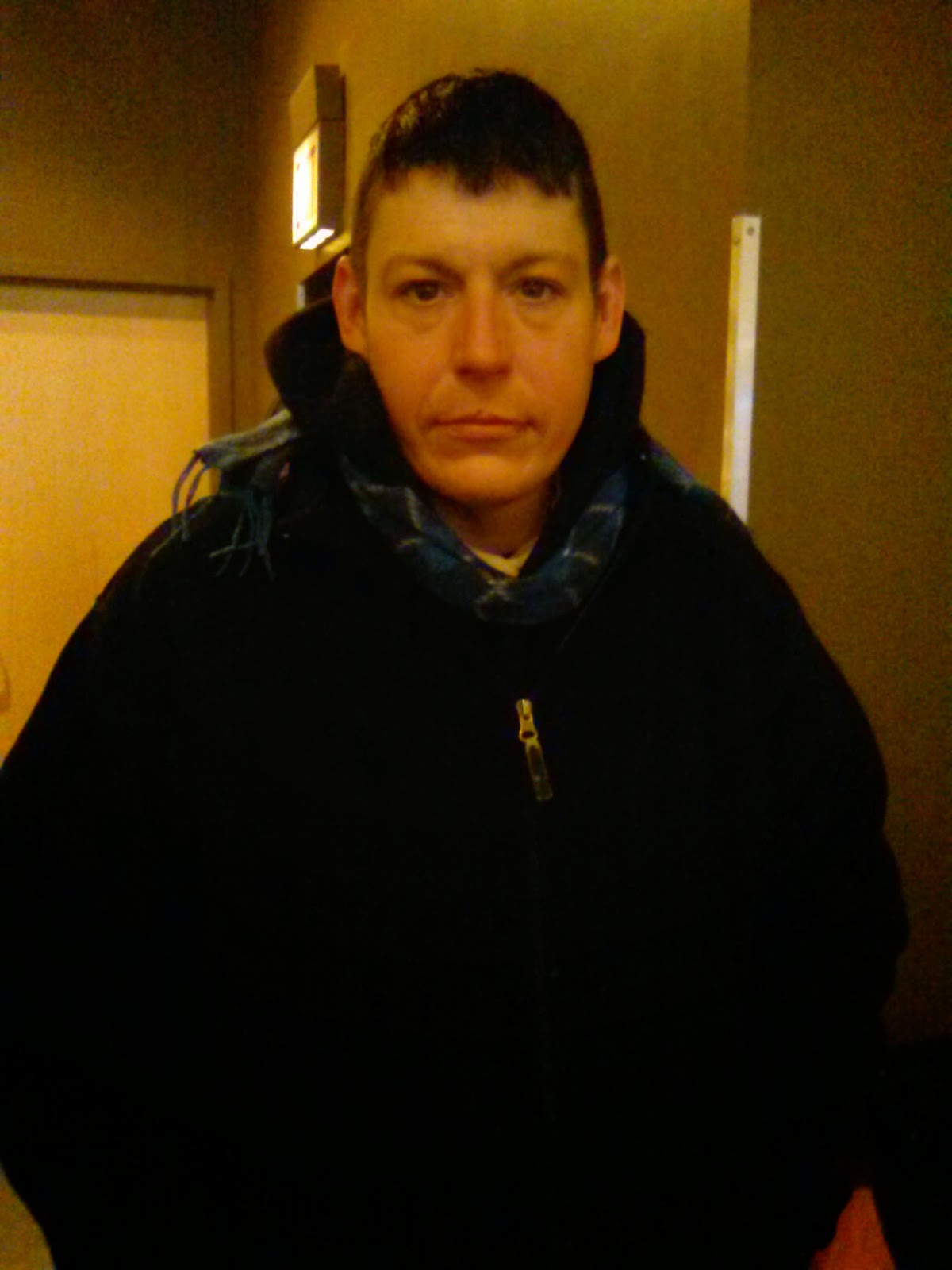 This is Dan looking "normal." He told me that when he takes off all his layers, his well-worn coat, people would treat him better because he doesn't "look" homeless.

Posted by S. Clelia Sweeney at 4:10 PM No comments: