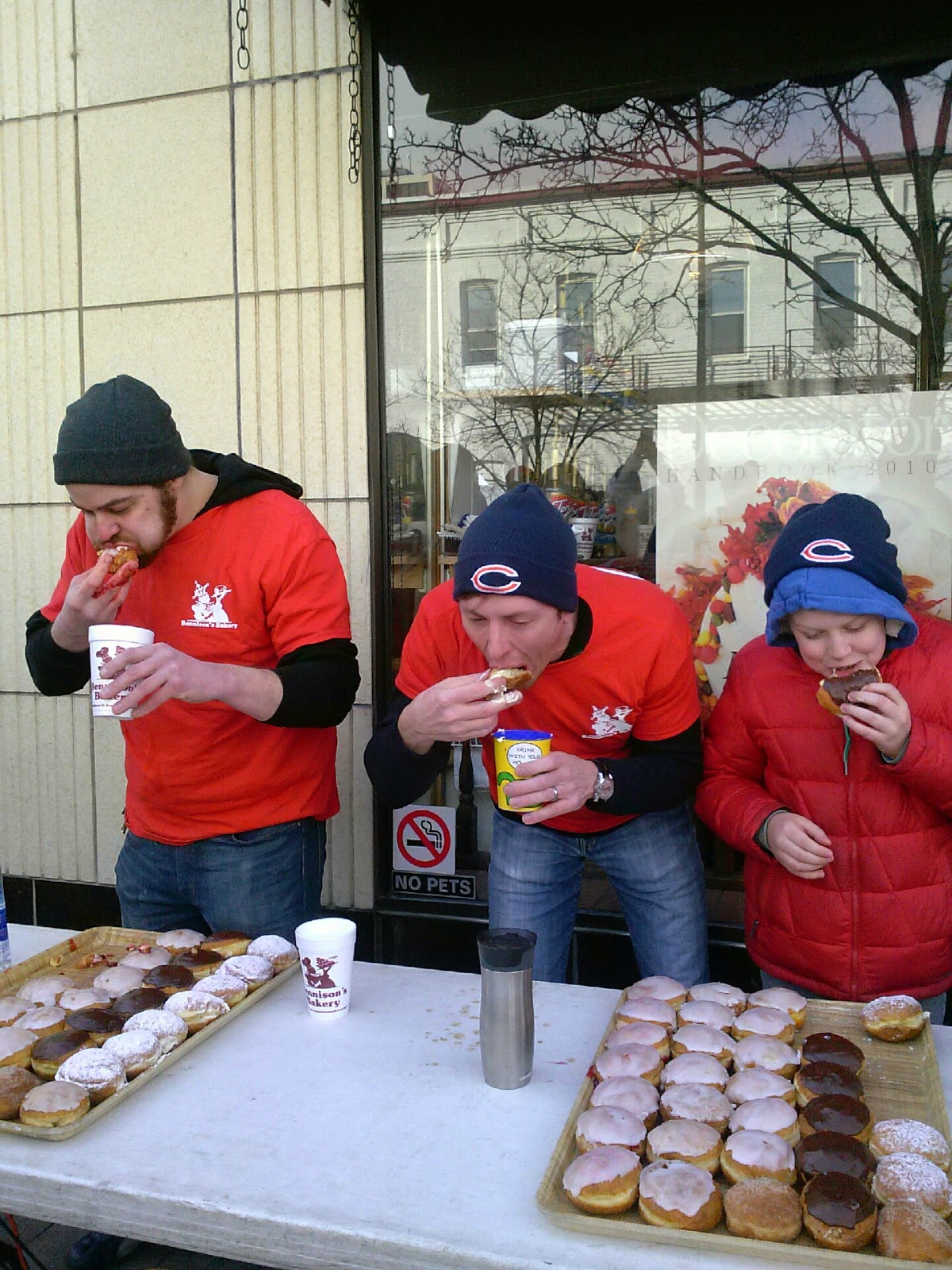 This Valentine’s Day I found myself standing in a small crowd outside Bennison’s Bakery in Evanston watching eight men and boys compete in a pączki-eating contest. Mothers stood with babies and toddlers to cheer on their fathers, bundled against the icy, lacerating wind.  Plump pastries – in flavors of strawberries and cream, chocolate, praline mousse, prune, apple, apricot, cream cheese, or bananas and cream – are rapidly consumed down the line of tables as the crowd cheers, laughs, and murmurs “Oh my Lord…”

A pączki – pronounced “poosh-key” or “pawnch-key,” depending on who you ask – is a rich Polish donut with jam or cream filling. They’re truly wonderful, something that Bennison’s Bakery has specialized in since its opening in 1938. Bennison’s is packed and bustling today with orders for Valentine’s Day and Mardi Gras (Fat Tuesday is known as Pączki Day in some circles, after all.) The atmosphere is warm and intimate inside, with four coffee pots piping on burners behind the counter and the scent of baking sugar mingling with easy-listening jazz in the air.

Outside, things are a little colder and harsher but no less convivial. The competition is varied; some chew determinedly and take time to swallow, while others cram fistfuls of pastry into their mouths in between slugs of water. Patrick, a habitual competitive eater, eats with two hands bloodied by strawberry filling. After the five minutes are up, he is declared the winner with 25 pączki. Patrick then bites with exaggerated nonchalance into yet another pączki, to laughter and the soft thudding of mittened applause.

This is Bennison’s 6th Annual Pączki-Eating Contest, and one of today’s competitors was in fact the winner of the first. This year he brought along his 10-year-old son, Kyle, to compete with him as a team. Before the competition, Kyle predicted that he would eat three pączki and that’s exactly what he did. The other competitors ranged from lanky twenty-somethings to middle-aged men.

All proceeds from the competition will go to Phil’s Friends, a cancer support charity. Each contestant was sent home with a t-shirt, a Bennison’s gift card, and as many pączki as they could carry. 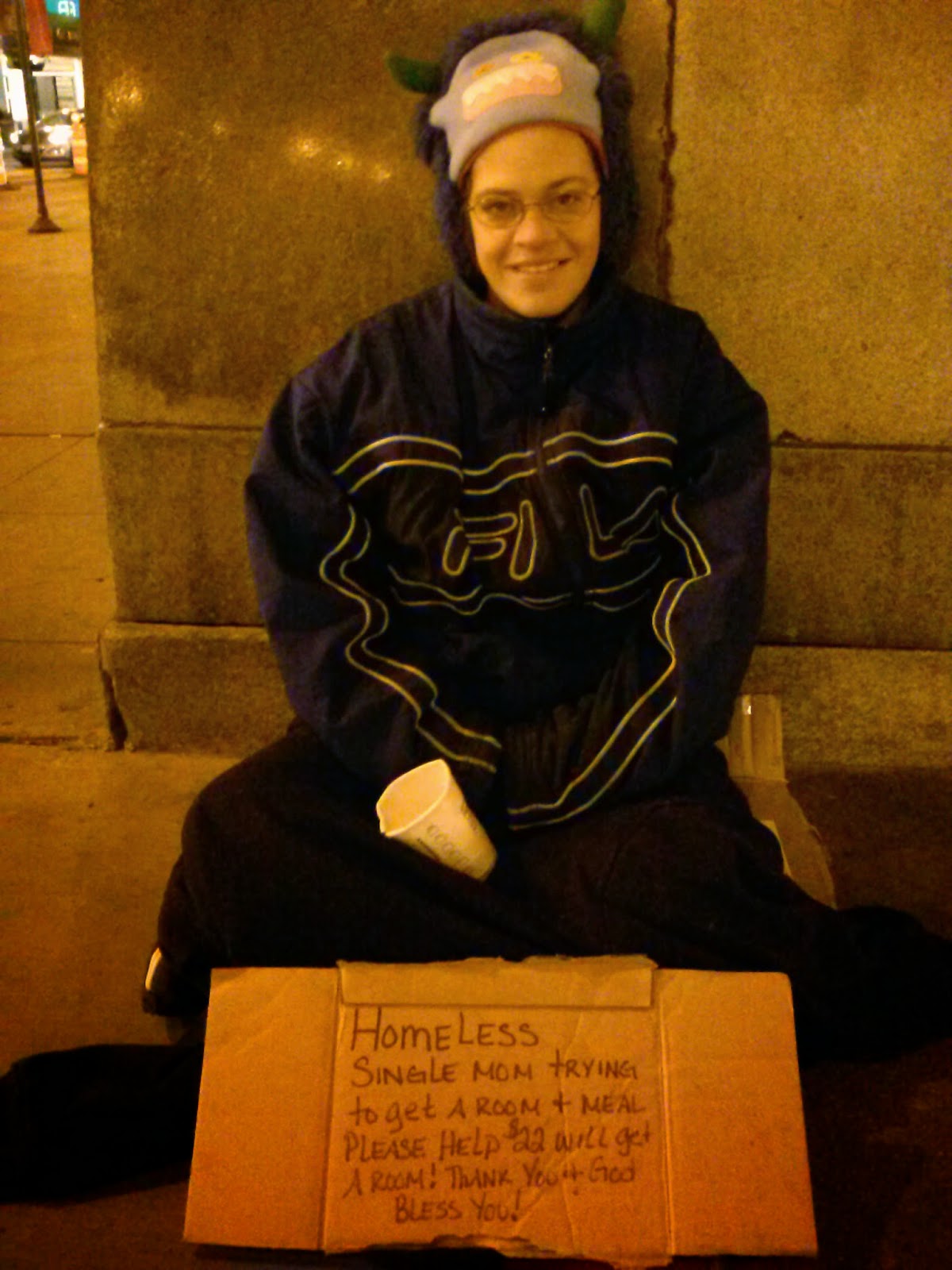 Although Chicago winters are brutal for everybody, they hit the homeless the hardest. Bonnie has been homeless for 8 years, in DuPage County and her native Chicago, and recently had her backpack stolen. She had four blankets in there, to wear in addition to her multiple shirts and jacket. That was right on State Street, where she has been sitting out tonight for 2 hours and has made $1.45.

“Have a great night, enjoy your weekend!” Bonnie makes a point of never directly aggressively asking passers-by for money. “I don’t want pity money,” she says. Her cardboard sign reads, “Homeless single mom trying to get a room + meal, Please help $22 will get a room! Thank you + God bless you!”

Some of the shelters she uses are Casa Central Shelter, Thresholds, Grace Place, and Safe Haven. Bonnie says that homeless people should stay away from Pacific Garden Mission in the South Loop – a place notorious for assault, theft, and mandatory Bible study. Many of these organizations have street teams that walk outside looking for homeless people to invite to warming centers. They also offer food, blankets, and “goodie bags” of basic essentials like socks and toothpaste.

Last winter Bonnie stayed at O’Hare from January to April. “They were actually very kind,” she says, provided that the homeless people there followed the rules and kept themselves clean (one of the biggest difficulties of living on the street.) Laughing, she told me that she had scabies that year and locked the door to an O'Hare bathroom so she could take a bath -- sneaking some well-deserved, necessary self-care time. She has also slept in police stations and hospitals overnight.

Money is not the only difficulty in finding a shelter for the night. Bonnie said, “It’s really unfortunate, but there aren’t many rooms for women. There are more for men.” One of her main priorities in finding a place to stay is keeping her 11-year-old daughter safe. Her name is Alexis and “she’s the light of [her] life.” She never takes Alexis out with her when she tries to gather money because, as she says, “Some people exploit their children that way.” On the night I talked with her, Alexis was staying with her grandmother.

Bonnie’s faith in God has kept her going through the years. She was diagnosed with cancer in 2009 and has since had 9 surgeries. The doctors originally gave her only a year to live. “I gave it all to God. I don’t know if you believe in God, but I sure do.”

She told me, “A lot of people think we did this to ourselves, and that it will never happen to them... You wouldn’t believe how many homeless people there are in Chicago. And they [other people] look at you like you’re dirt under their shoe.” Bonnie is currently applying for government disability payments. But until then, she is unable to work and lives on the streets. She survives through her own perseverance, ingenuity, and the charity of others.

If you or someone you know needs help staying warm on the streets, call the Illinois Department of Human Services at (800) 843-6154. You can also dial 311 to request a ride to a shelter or neighborhood warming center.

Posted by S. Clelia Sweeney at 6:36 PM No comments: