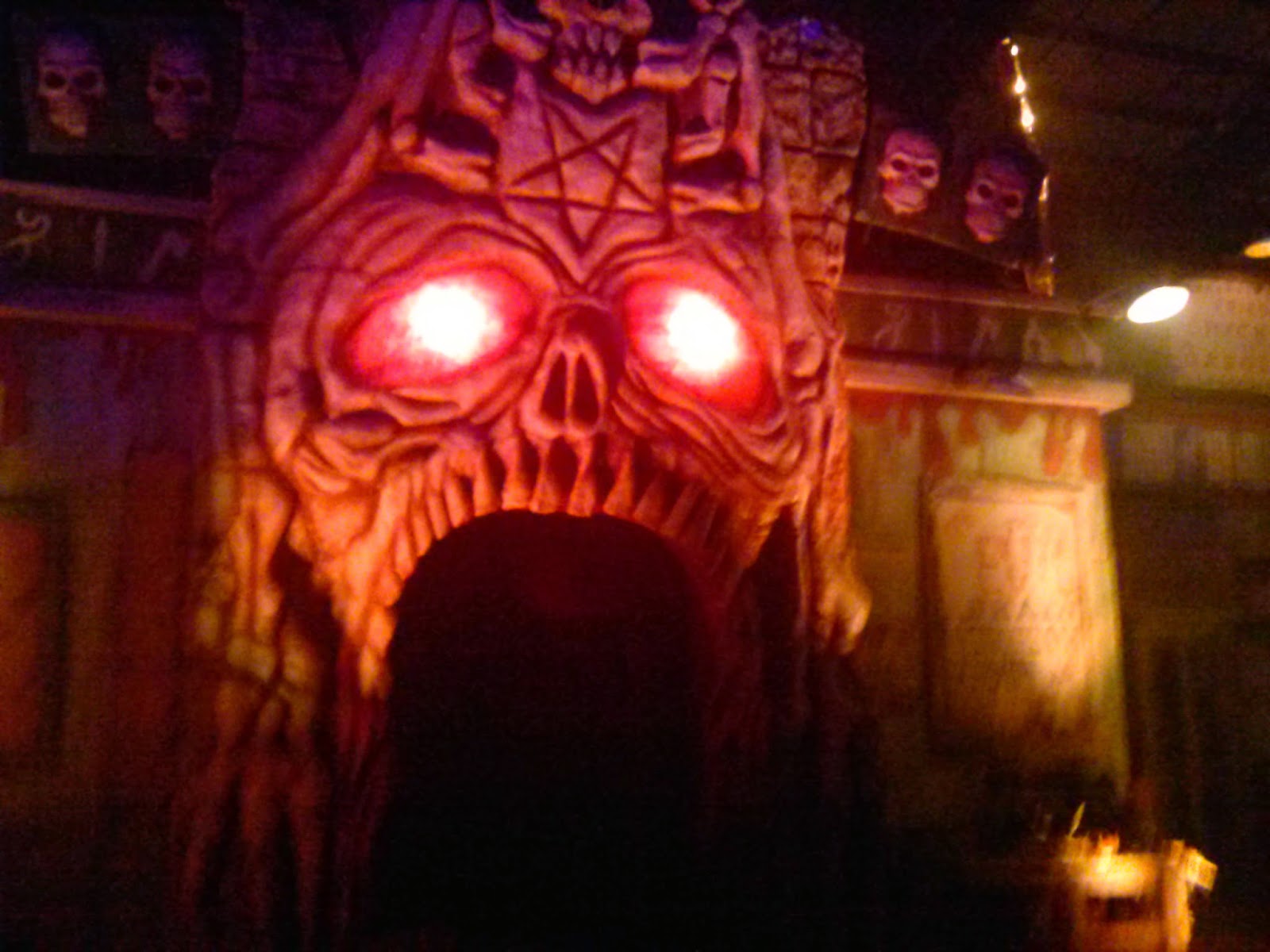 It is two weeks before Halloween and I’m standing inside a tent with a man in smeared clown makeup shouting at me: “Are you all ready to see some sick, twisted shit?” This is Rob Zombie’s Great American Nightmare, an attraction of three haunted houses way out in Villa Park, Illinois, and I'm about to go into the serial killer house. The outer façade is resplendent in sensationalistic Americana with a healthy dash of psychobilly: hay bales, jack-o-lanterns, rusted metal, a sharp-toothed taxidermy monkey, and gaudy signs advertising attractions inside. One painted clapboard sign reads, “SEE – the PSYCHO of PLAINFIELD – A TRUE CANNIBAL.” Ed Gein is the famous killer the sign is referencing; he robbed graves, murdered two women, and allegedly (though likely not) cannibalized corpses in bucolic 1950’s Plainfield, Wisconsin. A sign almost exactly like this was once hung outside a carnival tent in 1958 to advertise a strikingly similar exhibition of serial killer entertainment. The difference is that in this 2014 haunted house there is an actor in a hunting cap playing Ed Gein, leering at the audience from his wood-shed filled with eviscerated plastic bodies; at the 1958 fair, there was a murder scene reconstructed with wax dummies in the very car that Ed Gein drove when he committed his crimes. This haunted house seems almost like a nostalgic attraction, perhaps taking some of its own authenticity-credibility from the fact that its recreational thrills are based in real-life tragedy.

The "Ed Gein ghoul car" made its first public appearance in July 1958 at the Outgamie County Fair in Seymour, Wisconsin, where it was displayed for three days inside a large canvas tent covered with blaring signs – ‘SEE THE CAR THAT HAULED THE DEAD FROM THEIR GRAVES! YOU READ IT IN ‘LIFE’ MAGAZINE! IT’S HERE! ED GEIN’S CRIME CAR! $1,000 REWARD IF NOT TRUE!’” The exhibit was soon shut down by public outcry, but Ed Gein has endured as a celebrity monster in America, inspiring the creation of iconic horror movies such as The Texas Chain Saw Massacre (1974) and Psycho (1960). Almost any famous serial killer can be substituted in this example of pop-culture entertainment – serial killers proliferate in film, television shows, true-crime novels, magazines, internet culture, and in the lexicon of Americana. Serial killers have been cast as our modern freakshow scapegoats, commodified subjects of psychological study and prurient interest in true-crime television and a wide array of media.

[The two paragraphs above mark the start of my undergraduate thesis as it stands right now (at 2.35 am, in draft form.) What follows is the rest of the "sick, twisted shit" I saw at the haunted house...]

A girl in blonde pigtails told us, "Keep your arms in at all times, or they will get chopped the fuck off."

The clown told the crowd, carnival-barker style, "Inside, you will see Jeffrey Dahmer *a few cheers* and a local favorite, John Waaaaayne Gacy! *loud cheers and whoops*"

As you walk in there's Lizzie Borden, hair hung raggedy and wild, banging an axe against the wall. Albert Fish jumped out at you from a door-frame, into a kitchen where a mother wept over a filthy, bubbling pot with a little girl's white shoe next to it. Erzebet Bathory was striding regally around a red-lit room crowing, "More blood, more blood!" as a water jet emptied into a tub from a female dummy hanging naked from the ceiling. Skinny Richard Chase was twitching in a fluorescent-lit living room with bodies torn open on the floor. We walked through H.H. Holmes' torture workshop and he told us, in a dapper derby hat and vest, "No, no, everything's fine" as he forced a screaming girl back into a cupboard.

There was even the complete Sharon Tate murder scene, spread out over two rooms and designed with intricate detail. Manson was proselytizing to the crowd, boring holes into people with his eyes, while his followers capered around the bodies gleefully. Haunted houses involve a strange combination of marveling at your surroundings while also giving into the desire to flee from perceived danger and jarring sensations. In this house, however, I felt no fear and wanted to soak it all in like a museum. The actors would occasionally seem annoyed with me and urge me along with an extra jumpscare or two.

The John Wayne Gacy room was shockingly obscene, and has been causing some controversy (obviously, this particular tragedy hits close to home for Chicagoans.) There was a tubby Gacy, dressed in his clown costume, sitting in an armchair surrounded by debris and clutter. He was wriggling his feet delightedly as he blew up balloons and popped them, smiling and hissing sexual threats to the passers-by. Facing him on the couch across from the chair were two dummies of small Boy Scouts, one with a long balloon forced into his mouth and his eyes squeezed shut in pain. Gacy said, "Ya like that? Want me to teach you how? Bet you already know how!" -- then he would taper off into shrill giggles.

I wrote down every sensory detail I could recall once I was out of the house -- there were also representations of David Berkowitz, Ed Gein (mixed with Norman Bates,) and Jeffrey Dahmer. After some minimal online research, I found that Rob Zombie had lifted the sets, costumes, and even physical stunts from a much more effective and interesting serial killer haunted house that was put on in New York City in 2012. It was called "Killers: A Nightmare Haunted House" and offered better acting, more engagement with the audience, and some small critique of the cultural fascination with killers. Rob Zombie primarily make horror fanfiction anyway, with his Halloween remake and his first film, House of 1,000 Corpses, being a blatant-but-mediocre send-up of the original Texas Chain Saw Massacre... and it's obviously worked to his advantage, however unimaginatively.

I'm disgusted with myself for having so much fun at this serial killer haunted house. Morally, it should not exist; but it does and it is turning a considerable profit.