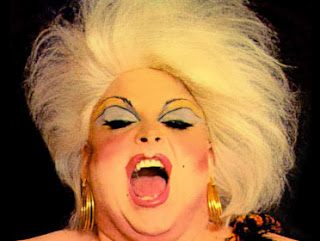 Hokey opener of all hokey openers: Harris Glenn Milstead, a chubby boy from Baltimore, just wanted to be a star. The more tonally accurate opener -- a line that Dawn Davenport screams into the audience of her stage show in Female Trouble (1974) -- I have used as the title of this article.

At the Logan Theater in downtown Chicago last night I stood in line with a crowd of middle-aged men in leather jackets and sparkling earrings, waiting to get into the new Jeffrey Schwarz documentary I Am Divine. This is Divine's first legitimate biographical treatment, and I had been excited for months to be able to go see it during its premiere run in Chicago. It was a tiny theater with classic movie posters lining the walls (some for kitschy horror films, which made me glow inside.) Humphrey Bogart and Lauren Bacall smoldered from the doors of the men's and women's bathrooms. The popcorn maker was frothing over and people were bitching about having their bags checked with a handheld flashlight. 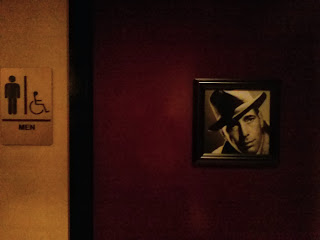 Reeling 31 is the second-oldest LGBTQ film festival in the country, and I felt proud to sink into its faux-satin seats and listen to this voluminous beauty bellow from the big screen. I swear, the prevalence of middle-aged men in the audience is not a prejudiced generalization -- looking back from my seat, I saw that they really did make up about 2/3 of the people there. The wonderful thing about this is that they had histories with Divine; they knew the counterculture midnight movie scene he and John Waters were coming from. Before the film started, the emcee asked who had "experienced The Divine" in person and hands shot up around the theater.

The film itself wasn't geared toward any specific audience, but definitely had a lot of choice nuggets for fans (of which I'm one, though with not nearly as much credibility as these older guys sitting next to me.) It was a heart-warming, soft-eyed look at Divine's life -- a life full of chaos, addiction, and debauchery but also a lot of pure human silliness and emotional trials. The anecdote that provoked one of the loudest laughs in the theater was about high-school Glenn doing his prom date's makeup. Not long after that, he went to a costume party dressed as Elizabeth Taylor. His date agreed that he outshone every girl at the party. 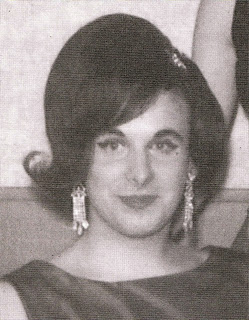 He did indeed want to be a star, to escape Baltimore and express himself in performance after a lifetime of being bullied and stifled in shame about his weight. After John Waters helped form his image and launch his film career, Divine took off (alienating his uncomprehending parents.) Much of his life was lived in self-destructive free-fall; he was like a camp Chris Farley in some ways, a fat performer who careened completely over the top and would do anything for a laugh. Case in point, his tiresome but still incredible claim to fame, is eating fresh dog shit on film in Pink Flamingos (1972). Wonderfully, even among the fans in this audience who knew exactly what was coming, that scene still provoked groaning, shifting in seats, intakes of breath... John Waters used to say that someone vomiting at one of his movies was like a standing ovation, and his work has clearly not lost its power to shock.

Part of the feel-good aspect of the movie is achieved by all the campy touches. There's a lot of pink glitter, basically. The closing image is an animation of Divine, wrapped in a white toga-style dress, winking out of sight as a harp-wielding angel in an exaggeratedly idyllic blue-sky stratosphere. So much of his performances are tinged with burlesque, grotesque, excess... but it would be impossible to tell his life story without comedy and flights of fancy.

It's undeniable that Divine was incredibly sexy, though I can't put my finger on how or why. Maybe it's a combination of the mellifluous, sensual, powerful, husky voice (with a great Baltimore accent -- "Connie Marble, you stand convicted of AAYS-hole-ism"), expressive blue eyes, and wild lack of inhibition with his huge body. He is such a bewitching performer to watch, you literally can't take your eyes off him and have no idea what he will do next. But reality intervened on the glorious spectacle -- Divine died young, from health problems that he was just starting to get a handle on (shortly after the filming of Hairspray in 1988). This was not before he reconnected with his parents, however. His sweet mother's interview segments were among the most touching moments in I Am Divine. 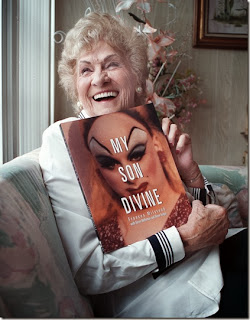 What is empowering about Divine the performer, the person? Why did I feel so much more vital and brave walking down the bleary neon-striped street after the show was over? I love a good freakshow just as much as the next person, but moreover, I identify with them. John Waters' Dreamland makeshift film studio of the 1970's was all about that: freak culture, bad taste, filth, deviant sexuality, hedonism, seedy glamour, TRASH. And Divine was undeniably the brightest star to come out of that grubby little enclave first formed in Baltimore.

There is something so beautiful and touching about Divine's life story, and my envious little heart goes out to anyone who can strut out into an unforgiving world with such raunchy style and splash. Watching it from a movie audience last night was pure vicarious, anarchic joy.