I entered the room and gasped -- it was Death draped in red. 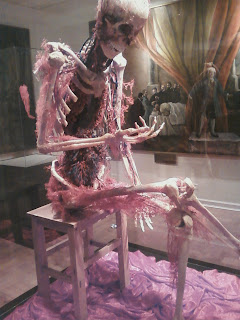 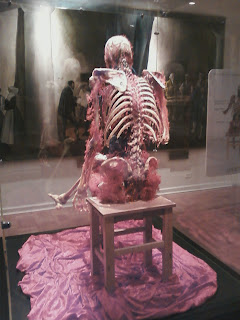 A skeleton posed elegantly on a chair, in an attitude suggesting a woman lost in a private thought at a cocktail party, her feet lapped in red velvet pooled at the base of the display. It was shockingly beautiful. The bones were threaded with blue veins and covered in vermilion arterial vessels, so delicately wisped that it looked like a red feather skirt puffed out around the skeleton's hips. I couldn't stop thinking of it as a woman. The bones were yellow like dead skin, gristly and crackling at the fingertips and toes. Teeth look gawky and protruding without a sheet of skin to cover them, but hers are still pearly-white and perfectly straight.

The International Museum of Surgical Science is possibly Chicago's strangest museum (possibly -- I'm still willing to test this.) Alongside the gleaming affluent sprawl of Lake Shore Drive is a statue of a stoic-faced man holding a quailing sick man up by his arms; behind that are four stories of artifacts and information about surgery. I started getting excited and taking notes once I passed a placard about congenital analgesia -- a rare genetic disorder that makes you unable to feel pain. Most sufferers are dead by age 25 because of little things like burns or joint pain (they never feel uncomfortable, your body's signal to shift position.) I am not a scientific-minded person at all, so I went through this as an art and history museum.

You are greeted by a glistening gurney on the first floor. Then, a little further up, is a sign on the door to an exhibit:


VISITORS PLEASE NOTE: You are about the enter the prenatal gallery...

Which of course sounded promising. The room was dimly lit with a subterranean glow, each exhibit in its own floodlight. There was a long table of fetuses in various stages of development contained in glass vials, their minuscule little bones tinted red. They seemed to glow with blood. The whole exhibit was haunting, but these especially. So delicate and small... like human tadpoles. In a glass case in the corner of the room was a 7-week-old fetus lying on its side, attached to a placenta. Its skin was like a wrinkled white peach, with a thin dusting of brown hair on its head and eyebrows inclined heartbreakingly upwards. There was also a fetal victim of Sudden Infant Death Syndrome, next to a conjoined-twin fetus that looked like something you'd see unveiled with a flourish at a carnival freak show. 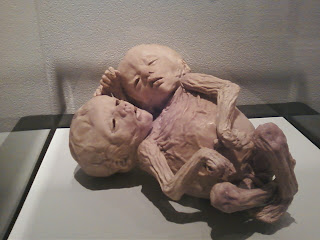 The museum was not solely populated with dead bodies, though. There was a whole cabinet of artificial legs and arms, a gynecological instrument from ancient Rome -- vagina specula -- and a plaster copy of Napoleon's death mask. I was struck by how flat-out attractive Napoleon was in death; with his paunch gone, cheeks narrowed down with the smooth bones accentuated, narrow lips, and aquiline nose, he was really beautiful. Walking through this museum produced a strange combination of feelings in me: I felt at once reverent, repulsed, and sensuously preoccupied with the structure of the human body. In the same room as Death draped in red (pictured above,) I saw the arteries of an infant's legs hanging suspended in a glass case and could not stop shivering until I turned away.

Entire passages and floors of the museum were relatively untainted with the odor of death, but naturally those don't stick as much in my mind -- exhibits about eyeglasses, hearing trumpets, X-rays, polio, painkillers (very interesting for tracing the history of intoxication, addiction, and big-business drugs in America)... One thing I realized: nurses are, aesthetically, very much like angels. That has to be on purpose. There was a bust of Florence Nightingale on one of the staircases, in white of course, and she had her eyes rapturously-yet-demurely upturned like the Virgin Mary. There is an atmosphere of care as opposed to violence in this museum, even though the history of the profession is bloody and gruesome by necessity.

Without the cushioning distraction of a gift shop to speak of I walked back out into the sunshine three hours later, my breath shallow and caught in my throat, feeling almost unbearably attuned to life.

Posted by S. Clelia Sweeney at 5:50 PM No comments: