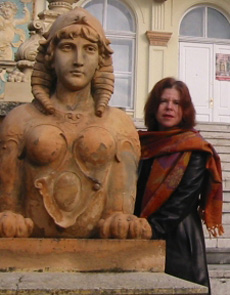 The third lecture in the B.A. Seminar series (but only the second that I've covered) is by Elissa Merder, an academic emissary from Emory University. Her talk, delivered from the sumptuous Blodgett Oak Room last Friday, was entitled Criminal Jouissance: Baudelaire's Poetry by Other Means.

LL: First, would you say that Baudelaire wrote from the perspective of entend du mal as a form of protest? Do you think that the political tension was conscious or a natural by-product of his passionate poetry?


EM: Baudelaire certainly saw himself as in a position of "revolt" in relation to the culture, politics and mores of his time.  However, it is not exactly clear whether or not this position of "revolt" was politically reactionary rather than being politically revolutionary.  Jean-Paul Sartre, for example, wrote a scathing condemnation of Baudelaire as a narcissistic and reactionary figure.  For Walter Benjamin, Baudelaire is politically interesting because he tears the veil off a certain image of the nineteenth century.


LL: Social strife is glaringly exposed in sexual relations: do you agree with Baudelaire on this, and if so what does that indicate about the sex lives of people on both sides of the malentendu conflict Baudelaire found himself in?


EM: Baudelaire was extremely misogynistic.  He wrote some truly shocking things about women.  He also frequented prostitutes and contracted syphilis.  He never married and never had any children.  However, in his writings about prostitutes (and even other women), he does manage to offer some compelling and thought-provoking images of the commodification of sex and the pressures on love in the modern world.  In other words, by reading Baudelaire, we can gain a better understanding of how love itself has undergone changes in response to modernity.


LL: In your opinion, to Baudelaire's prose-poems truly rupture the poetic harmony of his habitual form, or do they function just as well in their own right?


EM: The prose poems are amazing poetic works. They are innovative and haunting and shocking and beautiful.  They are, however, formally very different from many of the verse poems.  In the verse poems, Baudelaire uses traditional forms (such as the sonnet), but fills those traditional forms with very modern themes and images (such as: traffic, homeless people, prostitutes, the isolation of city life). Both poetic forms are innovative and worth reading.


LL: How does the message of "The Bad Glazier" and Baudelaire's general societal insurgence relate to other social, political, and artistic movements such as Surrealism, Existentialism, and Dada (you can pick all or none or some of these, by the way -- all just conjecture)?


EM: The movements you mention are all twentieth-century phenomena.  Those twentieth-century movements mostly came about in response to multiple assaults on consciousness and self-presence.  These include: the first World War, the development of psychoanalysis, the invention of the cinema. As I remarked above, Sartre was against Baudelaire as he felt that Baudelaire embodied a kind of anti-existential figure.  For Sartre, Baudelaire was self-indulgent and failed to act freely and in an engaged manner.  In short, Sartre believes that Baudelaire manifested "bad faith" in his life and politics and that this bad faith saturated his poetry as well.  Having said this, Baudelaire anticipated many of the radical changes in the modern world long before they actually became dominant.  For this reason, his writings enable us to see something about modernity in its emergence.


LL: You said that Baudelaire's poems are more like happenings or performance pieces than actual poems because of the shocks they inflict on the reader, as well as their visceral vivid quality. Could you explain that a bit more?


EM: My point about the “theatrical” nature of Baudelaire's poems refers specifically to the prose poems.  They are like happenings because they are not primarily descriptive: they are themselves "events" that make something happen.  Like street theater, Baudelaire's prose poems blur the line between the world created inside the poem and the world in which that poem is situated.  As I mentioned during the discussion, some people actually thought that Baudelaire actually beat up a bad glazier.


LL: How was your experience working with the students at Simon's Rock compared with other colleges and other academic arenas you've been involved with?


EM: I had a lovely time at Bard College at Simon's Rock.  I was impressed by all the students I met.  The atmosphere is very alive and crackles with intellectual energy.  It was delightful to speak to so many students who are eager to learn and crave intellectual challenges.  I would like to thank everyone I met for this wonderful experience.
Posted by S. Clelia Sweeney at 5:21 PM 1 comment:

Glowing white teeth on sets of strobe-lit legs… a whirling rainbow pinwheel arcing across the back wall… one sad balloon bobbing in the corner… the tepid level of stimuli at a Simon’s Rock dance isn’t enough to create the illusion of an ecstatic rave crowd. Navigating through these glowing teeth on legs gathered in sparse clusters, these minefield bursts of sound, it’s almost impossible to really lose yourself. I was at this Saturday night’s Twins Dance, wearing my self-consciousness plastered to my forehead like an old bandana. The only twins I saw were a pair of ‘80s girls – glinting glitter eyes, stripey thighs, ponytails on the side.
It was a three-DJ lineup of Moses Sukin, Kali Malone, and Clara Liberov. The Snack Bar was rumbling like a hungry hive before the doors opened, but dances always start slow -- an over-calculated exaggeration of the Simon’s Rock Time phenomenon (basically, if you show up on time, you’re showing an uncouth amount of desire to be there). During Moses’ set, the first one of the night, I met two girls who were walking out smiling and laughing uncertainly: “It’s scary…”
Well, it’s certainly twitchy -- machine-heart blips shot through with samples (Pixies, M.I.A., Rebecca Black), and some Dubstep whub-whubbing. There were many points where the music would jolt to a halt, then ooze slowly into a tectonic-paced grind that no one wanted to attempt. General disorientation of hesitant movement... a few earnest dancers were still bopping along to each jilted half-beat while the rest stood still waiting, trickled out the door, or reclined on the back wall watching that rainbow pinwheel of lights circle behind the DJ himself, hunched intently in the ghost-glow of his Macbook. This is not to say that there weren’t genuinely danceable moments in the set; but with too many beats artfully skipped in the remix for people to get their own heartbeats revved up to it.
The ensuing sets garnered much larger crowds. John Snyder made an appearance; sitting on the sidelines in a knot of friends, basking wide-eyed . In one unlikely, magical, fleeting moment, Corey MacGregor walked through the thundering room spinning juggling sticks, smiling meditatively. Kali herself was looking effervescent in a high-piled ponytail and a high-waisted jungle-print spandex outfit.
Dancing in the half-dark from cluster to cluster, sneaking from one tendril of ghost-strobe flesh to another, just when I began to lose myself, something would come crashing in – literally, in the form one of one energetic epileptic ragers running through the crowd – to remind me where I was. Between dipping out for breaks and chatting around the water cooler, the crowd volume undulates like an amoeba as the dance goes on. Clara’s set closes out with a real shot at transcendence, which I catch on the wind as I’m walking back to Hill; the sound of Pink Floyd’s “Great Gig in the Sky”, soaring moaning into the night…
Posted by S. Clelia Sweeney at 7:37 PM No comments: It’s Friday night in the Student Union, and outside Miles Wilcox’s Ask a Tranny (And Why You Shouldn’t Call Us That) panel, a table of loudly chattering students circles around from chair to chair every five minutes, facing a new partner across the table with each oscillation. This process is called speed-friending -- the aim is to get to know as many new people as possible while under a time constraint. It’s like a version of arbitrary Facebook friending set on the concrete plane of reality. Jeff Landale, senior, commented that it was a good way to meet freshmen and people that he ordinarily doesn’t talk to.

Lizst's Ballade no. 2 in B minor, S. 171, is filling the McConnell Auditorium with those same sinister, thrilling, cacophonous chords that Horowitz banged out at the Met in 1981 with such memorable passion. Right here, right now, in real life, right in front of me, Manon Hutton-DeWys is wielding this fat axe of sound and battering at all the edges of this theater, sending off sparks. She is a slight, small, poised woman in a dress printed with shimmering silver disks. She pumps the pedals in tiny heels that occasionally squeak against the floor.
Hutton-DeWys has a dazzling record simply rolling with credentials (...CARNEGIE HALL...), but because she attended Simon's Rock College she returns periodically to grace Great Barrington with her mastery. I am used to being the only young person at classical concerts; even here on a college campus, the audience is almost strictly senior citizens. There is a handful of students, mostly all banked on the left side of auditorium where we can watch her hands play in the light. Hunched over and serious, she follows with her eyes one hand scuttling across the slippery-glossy keys in a run of sparkling notes. Her arms are reflected in the piano itself, the most majestic and indisputably tuned one on campus -- it has been shined so vigorously that you can see the copper strings reflected in the underbelly of the open lid.
She closes out the show with a Chopin sonata, also in B minor, and emerges after persistent applause for a Chopin nocturne encore to complement its predecessor. It seems like the audience cannot stop clapping and "mm"-ing with pleasure, with all that pent-up admiration kept bottled inside in the aftermath of previous movements. We stay still in our seats, corseted by decorous silence.
A few of students headed straight to the dance after the concert -- straight to a hothouse of sweat, bumping & grinding red-faced in the ecstatic seizure drone. I tried, but didn't stay long. I ended up walking home still lost in the calm of Chopin, in the repressed state of passion that classical music instills in me. Obsessed with those carefully contained segments of precarious sound structures flashing their temporal sublime beauty in the sun of your immediate attention, the revelation of your conscious mind latching onto something undoubtedly sublime, before falling away into splinters and nails to build the next structure, the next phrase, of precarious instantaneous beauty.
Posted by S. Clelia Sweeney at 6:49 AM 1 comment: